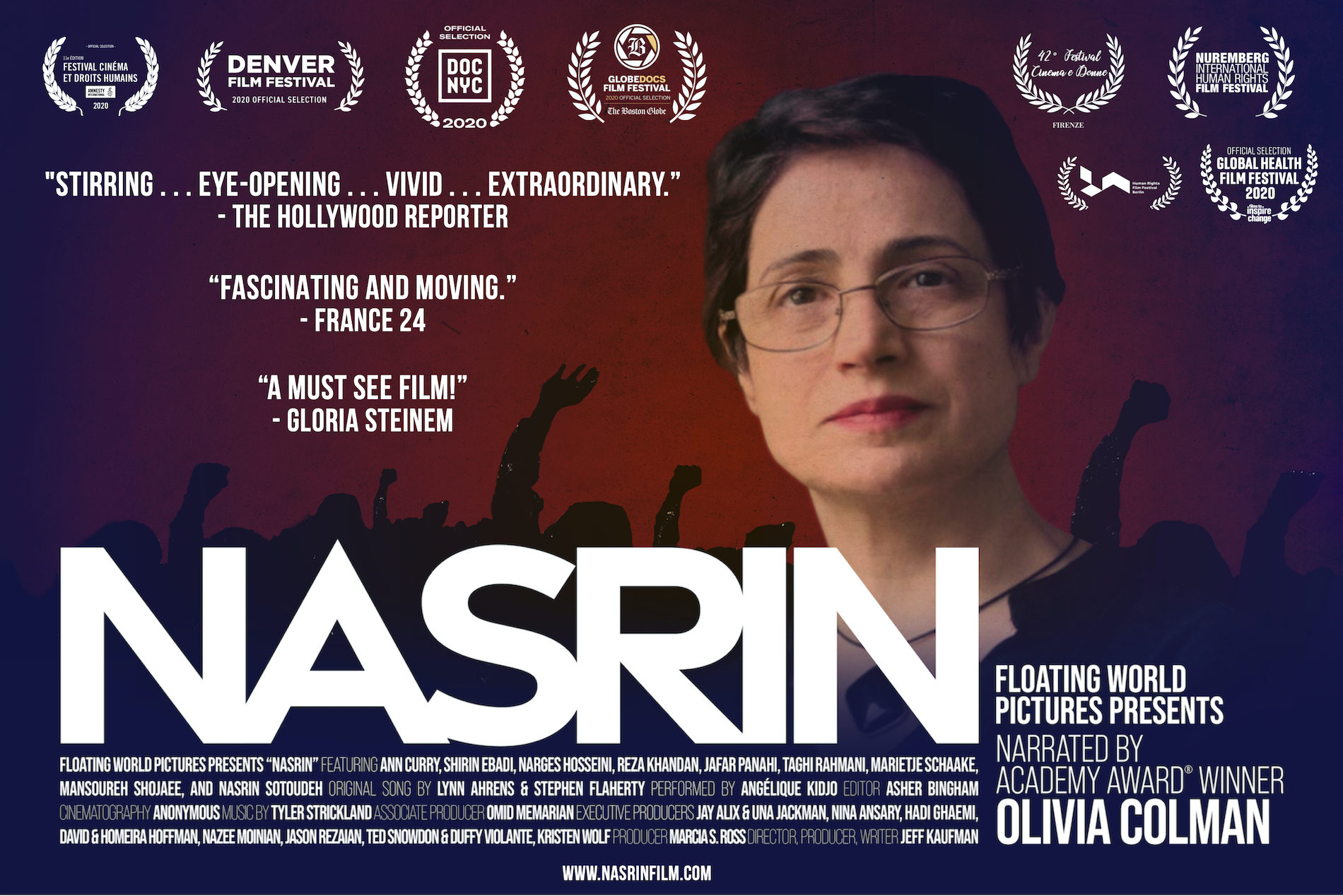 On Human Rights Day, We Pay Tribute to Nasrin

On this U.N. Human Rights Day, a special edition of NIAC’s Human Rights Tracker would like to recognize the iconic Iranian human rights defender, Nasrin Sotoudeh, and encourage everyone to support and watch the forthcoming documentary film, Nasrin.

On December 2nd, Iranian authorities ordered Sotoudeh back to prison following a short medical furlough after she tested positive for Covid-19. Despite her continued health issues and the hope that authorities would use this opportunity to free the renowned human rights activist and attorney, the injustice of her detention continues. It is both sorrowful and serendipitous that the following day Sotoudeh was presented the Right Livelihood Award, also known as the “Alternative Nobel,” for her unwavering courage in the face of unremitting cruelty and her struggle for human rights.

That Sotoudeh could not be there to accept her award along with her peers is a testament to the severity of her plight. However, she was able to share an audio message at the ceremony, which—not surprisingly—Sotoudeh used as an opportunity to support and bring attention to all political prisoners in Iran. In poor health, in prison, as her own government tries to silence her, Sotoudeh remains the embodiment of strength.

On December 9th, the United Nations Human Rights Office of the High Commissioner issued a statement condemning Sotoudeh’s return to prison and calling for her immediate release. It is her extraordinary resilience that has captivated the attention of people all across the globe, as the voices demanding Sotoudeh’s freedom have grown into a thunderous cry for justice. The culmination of these efforts and the importance of Sotoudeh’s story is captured best in Jeff Kaufman’s new documentary film, simply titled, Nasrin.

The film—taped mostly in Iran—is not just about Sotoudeh the activist. Kaufman’s incredible portrait of Nasrin gives the audience an intimate look at Nasrin, her family, and what motivates her unyielding drive to do her work as an attorney and activist. Following Nasrin on her journey, the audience is also given a rare glimpse into Iran that breaks from the caricatures and cliches often used in depicting the country in our media and news.

Nasrin herself explains how her children were the catalyst that moved her to begin a legal career and defend children’s rights. From there her efforts expanded to defending women, human rights activists, and working to abolish the death penalty in Iran. Featuring interviews with her husband, Reza Khandan, as well as prominent Iranian activists such as Shirin Ebadi, Mansoureh Shojaee, Taghi Rahmani and others, the film weaves the tale of Nasrin into the larger movement for human rights in Iran.

As its name indicates, this is a portrait of Nasrin in her own words, and how her story conveys the story of a nation that has struggled for over a century to realize the promises of self-determination, freedom, and equity that human society has long espoused, though only nominally fulfilled. Though Iran has had—and continues to have—many national heroes, activists, and patriots that have sacrificed their lives in pursuit of such promises, Nasrin stands out like iconic figures of the past that transcend national borders and sentiments. The story of Nasrin is the story of all of humanity, which is still fighting at every turn to achieve what may sound ordinary, but is indeed wondrous: justice.

Despite every obstacle, Nasrin continues her work and has become an inspiration to people around the world. In a letter to her husband, Nasrin both painfully and beautifully reveals her strength of character and an individual’s capacity to confront brutality with grace:

“Do you remember the joy with which the three of us greeted you every afternoon when you came home from work, we were a happy family. And despite the threats by my interrogator when he threatened to obliterate me and my husband from the face of this earth, we remain happy. For my interrogator did not realize that happiness lies within an individual’s heart.”

Buy your tickets for Nasrin here.