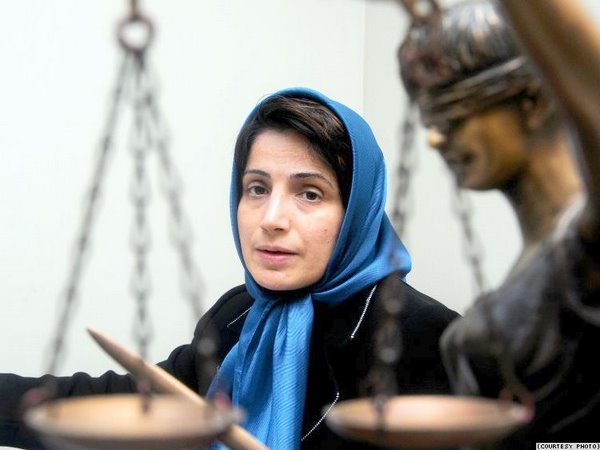 Despite temporarily releasing thousands of prisoners to prevent the spread of Covid-19 in crowded jails, Iranian authorities have failed to release political prisoners or prominent prisoners of conscience, such as Nasrin Sotoudeh. Recognized globally for her human rights work, Sotoudeh has served unjust prison sentences in the past, simply for doing her job as a lawyer. She is currently serving an outlandish 38-year sentence for her work as an advocate and defender of women’s rights in Iran.

Doubling down on their cruelty, Iranian authorities recently blocked Sotoudeh’s bank account, bringing further economic hardship to her family. While these measures are intended to silence outspoken critics such as Sotoudeh, Iranian activists have shown time and again their courage and strength in the face of such brutality. Rather than acquiescing under pressure, Sotoudeh’s lawyer, Mohammad Moghimi, announced on Twitter that Sotoudeh “has gone on a hunger strike to protest the unjust and illegal situation of political prisoners, which has been exacerbated by the outbreak of Corona.”

This news comes as reports surfaced that political prisoners are contracting Covid-19 at worrying rates. According to the Center for Human Rights in Iran, labor activists Esmail Abdi and Jafar Azimzadeh, as well as human rights attorney Amirsalar Davoudi and journalist Majid Azarpey, and others, have contracted the virus that has wreaked havoc globally. Lack of tests, clean facilities, or following proper social distancing measures have all contributed to the spread of the virus in prisons, and worse, reports indicate that prisoners are not receiving needed medical treatment.

While all prisoners must have their human rights respected, such as protection from contracting the virus, provisions for hygienic facilities, and treatment for any illnesses, in the case of political prisoners and prisoners of conscience the criminality of this conduct is exacerbated by the injustice of their incarceration itself. Sotoudeh is no stranger to unjust captivity or hunger strikes, in March she also went on a hunger strike to release prisoners during the pandemic. However, the question is not of Sotoudeh’s resilience, but rather of the inhumanity of Iranian officials to continue these unconscionable practices. Iranian authorities must uphold their human rights obligations, provide appropriate facilities and treatment for all prisoners—especially during a pandemic—and free all political prisoners and prisoners of conscience.