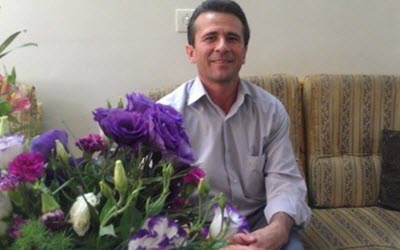 The Center for Human Rights in Iran reported this week that well-known Iranian labor rights activist, Jafar Azimzadeh, was released from prison on April 10th. While the picture of Azimzadeh freed and in his home is welcome news, many labor activists and political prisoners continue to suffer in Iranian prisons. A prominent member of the Free Union of Iranian Workers, Azimzadeh has led the struggle of Iranian workers in their right to organize, and to stress improved labor conditions, fair pay, as well as safety in the workplace.

For demanding such basic and universal rights, Azimzadeh—along with other labor activists—have become the target of Iranian security forces and judiciary. Azimzadeh himself has had several encounters with Iranian authorities and the judicial system in the past decade, and prosecuted on various ambiguous charges, such as “assembling and colluding to act against national security” and “propaganda against the state.”

Azimzadeh was sentenced to six years in prison in 2015, after collecting thousands of signatures from workers making a list of basic demands to unionize. After going in and out of prison, Azimzadeh’s sentence was prolonged in 2020 for his activism from prison. While rights to due process were violated in his legal proceedings, in prison Azimzadeh also faced prolonged solitary confinement and an unhygienic prison standard during a pandemic.

Unfortunately, the case of Azimzadeh has become common for Iranian labor activists—as well as other human rights activists across the spectrum—in an attempt to silence dissent. The release of Azimzadeh is a reason to be happy, however, the unjust system that allows activists like Azimzadeh to be treated as criminals for demanding their rights is still in place. Iranian authorities must abide by their human rights obligations under international law, heed the calls of their people, and give Iranian workers the respect they deserve as the backbone of the nation.