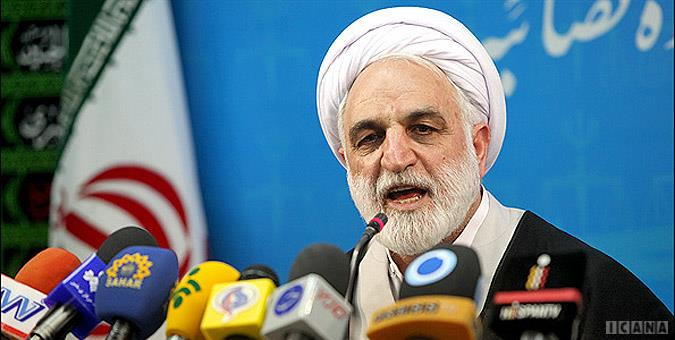 On July 1st, Ayatollah Ali Khamenei appointed conservative hardliner Gholam-Hossein Mohseni-Ejei to Iran’s highest judicial position in a move that signals darker times ahead for the Iranian populace. Ejei, like the outgoing judiciary chief and President-elect Ebrahim Raisi, has a longstanding history of blatant human rights abuses that date back to the early years of the Islamic Republic. International onlookers have expressed their concern that Raisi’s engineered election and Ejei’s subsequent appointment demonstrate Iran’s ruling establishment’s intention to utilize the judicial system to repress peaceful dissent in Iran.

Ejei’s path to judiciary chief is littered with bodies whether it be from his tenure as Representative of the Head of Judiciary to the Ministry of Intelligence during the 1988 executions of thousands of political prisoners, or from his time as Intelligence Minister from 2005-2009 when he accused, tortured, and falsely imprisoned civil rights activists and journalists. Perhaps Ejei’s most egregious crime is his connection to the 1990s chain murders of more than 80 writers, translators, poets, political activists, and ordinary citizens and his implication in the disappearance of Pirouz Davani.

Both Ejei and Raisi have a history of human rights abuses and a disregard for international human rights standards. In 2009, the pair were chosen to investigate allegations of torture and sexual assault against demonstrators protesting the outcome of the contested 2009 election. Despite strong evidence in these cases, Ejei and Raisi concluded that there was not enough to prove the allegations. The duo was proven wrong after a Tehran prosecutor was later found guilty of abusing and murdering four people at the Kahrizak Detention Center. In 2010, the U.S. sanctioned Ejei for his actions in the aftermath of the 2009 elections—sanctions that remain in place to this day.

Ebrahim Raisi and Gholam-Hossein Mohseni-Ejei have risen to the highest political posts, as heads of the executive and judicial branch of the Iranian government respectively, despite their notorious human rights abuses. Their continued role in the Iranian political system indicates that barring a significant change in trajectory, the Iranian government will continue to suppress political dissidents and activists. According to Article 157 of the Iranian Constitution, the head of the Iranian judiciary should be, “a just honorable man well versed in judiciary affairs,” yet in the face of Ejei’s decades of human rights violations, these gilded words ring hollow. If Iran truly wishes to exhibit a commitment to the values it espouses, it must first begin by holding domestic perpetrators of human rights abuses accountable.