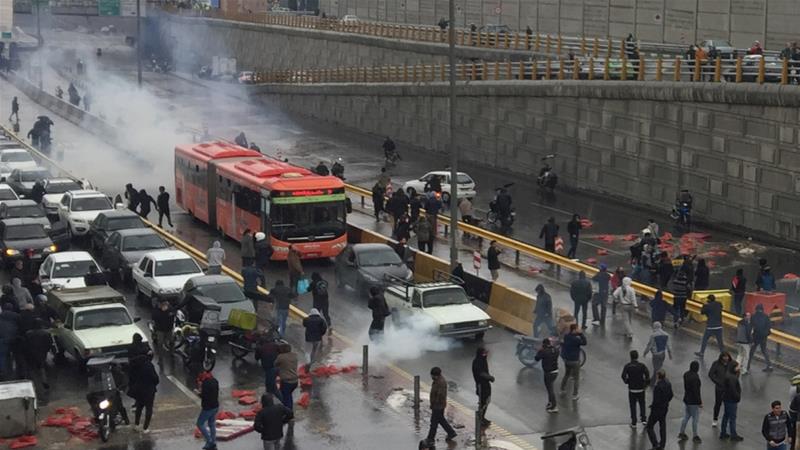 Iranians Killed and Arrested in Protests Across the Country

On Friday November 15, Iran’s government sharply raised gas prices, further hurting Iranians who have already been struggling economically due to government mismanagement, corruption, and the effects of harsh U.S. sanctions. The price hike sparked protests in cities across the country, as Iranians took to the streets to air their rightful grievances and express their frustrations. However, as seen in the past, Iranian authorities have confronted protestors with inexcusable violence and have worked to stifle the demonstrations.

Four days in, the protests have continued to rock different parts of the country, with banks and other buildings set on fire as Iranians resist the security forces who have killed at least 12 people, while other estimates, according to sources on Twitter, range as high as 200. Over 1,000 people have been reportedly arrested, one of which includes Sepideh Gholian, a 22 year old labor activist who had been released from prison only a few weeks ago. Gholian was first arrested in January of 2019 for her participation in workers protests at Haft-Tappeh Sugar Cane Company. After a video of her was posted online protesting the increase in gas prices, she was arrested again.

To add to their draconian assault on the rights of Iranians to assemble and protest, Iranian authorities have shut down internet services in an unprecedented online blackout, effectively cutting off Iranians from the outside world. Additionally, Iranian authorities have silenced domestic journalists to prevent Iranian media from criticizing the gas prices or covering the protests.

It is without question that the right to assemble, protest and express dissent is an inalienable right and recognized as such under international law. We condemn all use of lethal force and repression of the demonstrations. Iranian authorities cannot silence their people’s grievances through the use of force, or by controlling communications platforms such as news media and the internet. They will have to confront the calls of their citizens and address the economic burdens that ignited these protests.