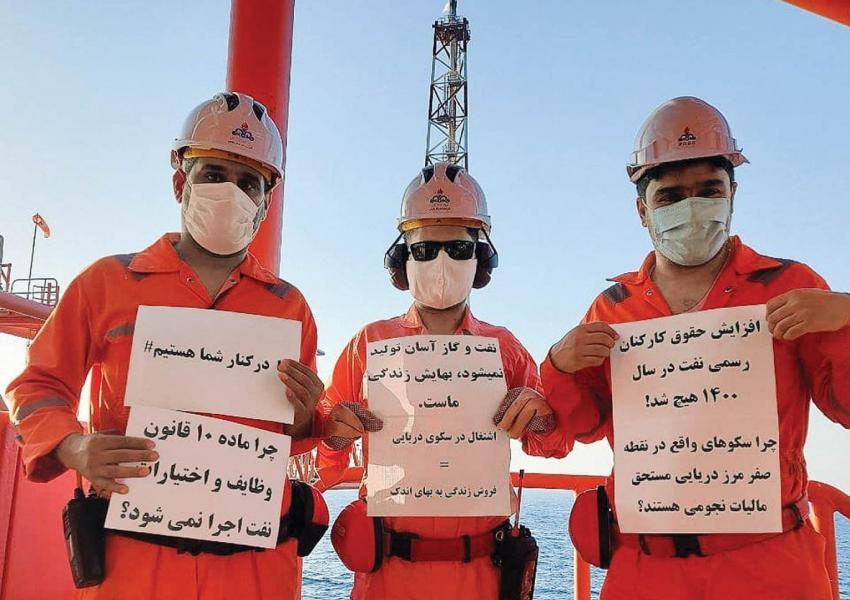 Over the past week, Iranian workers in the oil and petrochemical industries have organized a national strike calling for better wages, payment of back wages, safe and healthy working conditions, and demanding the rights that should be given to all workers across the world. Videos and online posts have emerged showing Iranian oil workers staging walkouts and protests using the hashtag “Campaign 1400,” in reference to Iran’s calendar year.

Millions of Iranians have been forced into poverty in recent years as Iran’s economy is ravaged by U.S. sanctions, in addition to Iranian government mismanagement and corruption, all of which has been exacerbated by the Covid-19 pandemic. Suffering under hyperinflation without rising wages, Iranian workers have struggled to secure essential goods such as food and medicine. Oil workers on strike are not only calling for their rights as workers to be recognized, but also more crucially for a livable wage.

President Rouhani responded by promising to “solve” the concerns of oil workers. He further argued that the strikes were from private construction workers and had not spread to Iran’s state-owned National Iranian Oil Company (NIOC). Workers at NIOC reportedly earn three times the wages and more labor protections. While there have not been reports of a strong crackdown against these striking workers, there have been conflicting reports on contract workers being fired in large numbers. Additionally, Iranian security forces have used force against workers in the past and arrested labor activists.

Workers’ rights are human rights. The rights of workers are a global issue that demands attention to ensure that Iranian workers, like workers everywhere in the world, earn livable wages, work in safe environments, and are shown respect for their human dignity and contribution to society. Iranian oil strikes and protests have gained support across sectors in Iran and across the world more largely.

The global connection of workers is best exemplified by a video tribute for these striking Iranian oil workers that featured the song “Bar Pa Khiz” (Arise) against the backdrop of the strikes and workers protesting. The song was used and popularized by Iranian leftists during the 1979 revolution and adapted from the famed Chilean song, “El pueblo unido, jamás será vencido” (The People United Will Never Be Defeated), which spoke to unity and the political movement for workers’ rights and a more just society. The revolutionary message of “Bar Pa Khiz” and its continued relevance for Iranian workers is captured in the chorus:

(Arise, demolish the foundations of the enemy’s palace)