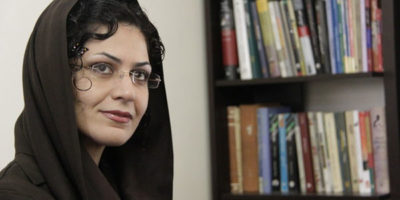 Center for Human Rights in Iran announced on Tuesday that well-known student activist, Bahareh Hedayat, was detained by Iranian security officials on February 10, 2020. Hedayat rose to prominence after her activism in the 2009 Green Movement, when Iranians took to the streets in protest of fraudulent election results.

A staunch critic of Iran’s authoritarian government, Hedayat has advocated for women’s rights and the accountability of state officials to Iranian citizens. In the aftermath of the 2009 protests, Hedayat was among the many activists arbitrarily arrested and unjustly sentenced to prison on dubious charges such as “acting against national security.”

After spending six years in prison, Hedayat was freed in September of 2016, but has continued to be an important voice of her generation calling for basic freedoms and democratic rights. Despite her time in prison, Hedayat has not remained silent in recent months as Iranians took the streets to protest in November of 2019, and again last month after the state’s admission to accidentally shooting down a civilian plane.

After speaking out publicly against the November crackdown and subsequent repression of protests, Hedayat was summoned by the University of Tehran’s security forces and, according to fellow activists, detained on February 10th. In addition to her critiques of Iranian officials, Hedayat has also been a strong opponent of U.S. sanctions on Iran and militarism. As of this writing her current situation is unknown and it also undetermined why her Twitter account, which she often uses as a platform for her activism, has been suspended.

The Iranian government must end its practice of arbitrary detentions and listen to the grievances of its citizens. As Hedayat has shown, even threats and imprisonment will not silence the voices of these courageous activists.