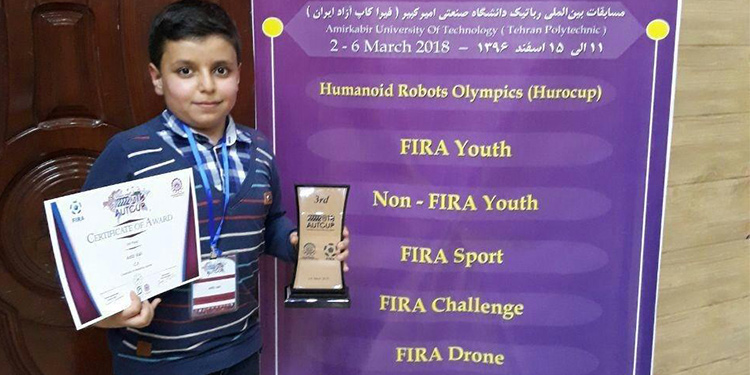 On July 8th 2020, Adib Vali received a call from his principal at the Salam School in Tehran with news that he cannot enroll in tenth grade. Vali has been at the top of his class since starting at the Salam School in seventh grade, and has received multiple first-place medals in international robotics and Artificial Intelligence contests. Vali’s expulsion is a direct result of his Baha’i faith, the week before his expulsion he had filled out a student form identifying his religion. Unfortunately, Vali is one of hundreds of thousands of Baha’is who face systematic persecution in Iran because of their faith.

This is not the first instance in which Vali’s family experienced persecution in Iran for practicing their faith. Vali’s father was forced by authorities to shut down his business for the past 12 years, despite his efforts to appeal to the Supreme Court and other judicial organizations. Moreover, in 1990, extremists killed Vali’s uncle in the Alborz province because of his religious faith. Since the 1979 revolution, the policies of Iran’s government have punished people of the Baha’i faith, while recognizing Judaism, Islam, Christianity and Zoroastrianism as religions in the country. During the first decade after the revolution, the government executed, tortured, and stripped Baha’i rights in mass numbers. Today, many Baha’is still suffer in jail on the basis of their faith. Baha’is in other parts of the world cannot return to their homeland due to fear of life-threatening persecution.

No one should ever experience punishment on the basis of their religion. However, for Baha’is in Iran, such inequality and unjust practices are commonplace. Worse yet, to target children seeking an education and impede this basic right is grossly unfair. The Iranian government must recognize the injustices committed not only against Vali, but all Baha’is in their country, who deserve equal rights before the law.