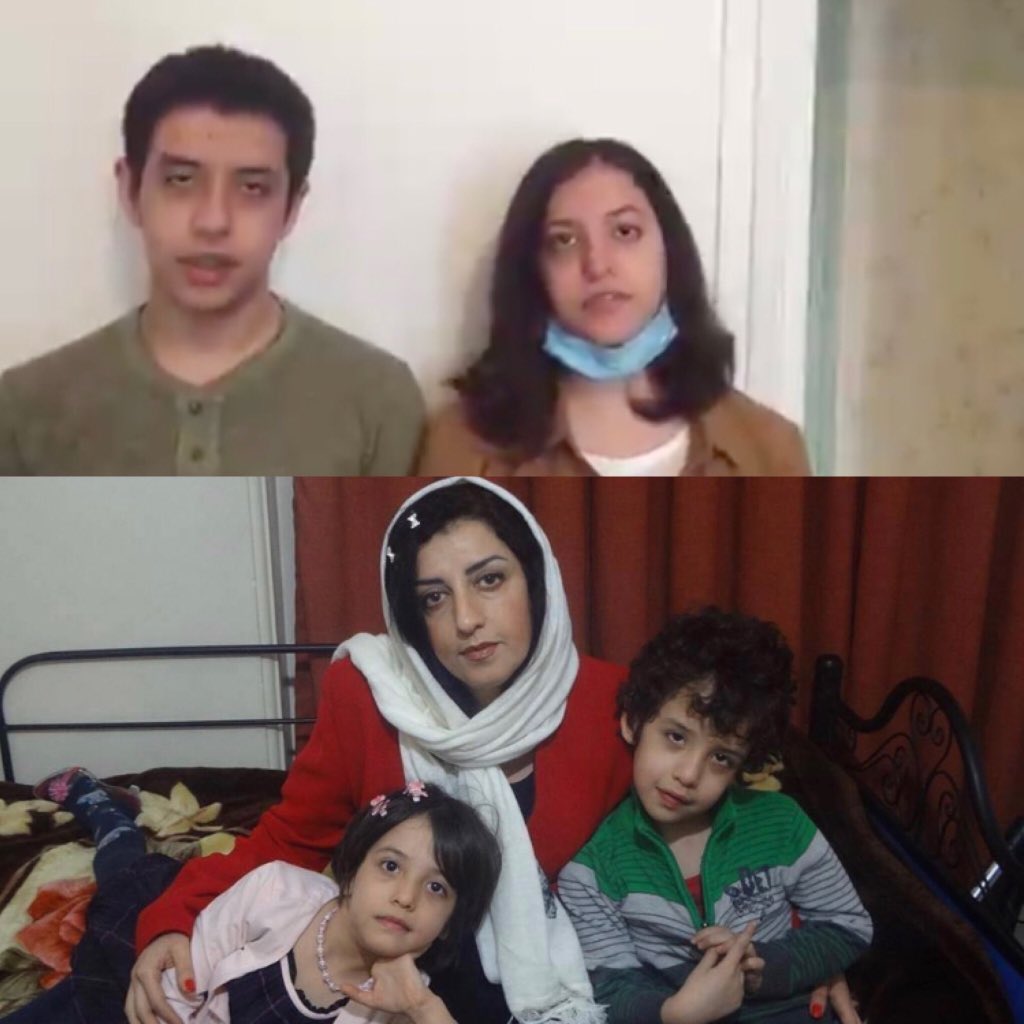 A Plea to Hear Their Mother’s Voice: The Case of Narges Mohammadi

Prominent Iranian activist, Narges Mohammadi, has spent much of her life fighting for human rights and women’s equality in Iran. Despite arrests, prison sentences, and separation from her family, Mohammadi has continued to fearlessly confront the injustices carried out by Iranian authorities, including working on campaigns to abolish the death penalty. Going in and out of courts and jails over the last two decades, Mohammadi was detained again in 2015 on spurious charges such as “acting against national security” and “propaganda against the state,” and sentenced to 16 years in prison in May of 2016.

Even before the Covid-19 pandemic, Mohammadi’s health had been deteriorating according to family and friends. But now the risk to her health may be lethal as Iran experiences a second wave of Covid-19 deaths, and prisons are ill-equipped to provide the resources needed to avoid transmission. Today, a group of U.N. experts called for the immediate release of Mohammadi and other prisoners of conscience, and expressed fear that Mohammadi had already contracted the virus. According to the U.N. Human Rights Office of the High Commissioner, prison authorities have failed to provide Mohammadi with needed medical care.

Though Mohammadi is well-known and her case has a long history, this week there was a resurgence of calls to free the ailing human rights activist after a video of her children—pleading to hear their mother’s voice after 11 months of silence—spread online. The video was posted by Mohammadi’s husband, Taghi Rahmani, a recognized Iranian journalist and political activist who has also spent much of his life wrongfully imprisoned, and who fled in Iran in 2012 to live in exile in France. Rahmani also appeared on BBC Persian the same day as posting his children’s video, to make a passionate case for Mohammadi’s release and rebuke the unjust proceedings of Iran’s judiciary, in which his wife is only one of many examples.

The video of Mohammadi’s young children imploring others to be the voice of their mother, so that they could hear their mother’s voice, struck a painful chord for Iranians who already face so many hardships. It also highlighted the impact on the families of Iranian activists, echoed by the undue prison sentence ordered this week for the brother of activist Masih Alinejad. Detained in September of last year, Alireza Alinejad has been sentenced to eight years in prison, as Iranian authorities continue to unlawfully pressure activists by targeting their families.

The continued wrongful detentions of activists and journalists must be condemned. We join the calls of the international community for Iran’s government to uphold its human rights obligations, free prisoners of conscience, and protect Iranian families, rather than tearing them apart. The cases of Mohammadi, Rahmani, and the Alinejad family are not about criminality; instead they are attempts at silencing the rightful grievances of the Iranian populace. But pressure will not silence the demands of Iranians or their pursuit for a just society and a government that is accountable to its people. As Mohammadi herself has movingly stated:

“What keeps me on my feet in this prison, while my body bruised and wounded, is my love for the honorable, but tormented, people of this country, and my ideals of justice and freedom. To honor the innocent people’s blood shed atrociously, I pledge to speak the truth, defy tyranny and defend the oppressed until my last breath.”