Thousands Return to Streets Across Iran

The New York Times has more coverage of today’s protests, and emphasizes that rallies took place in cities across Iran: 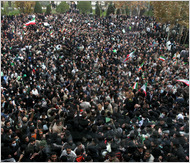 Thousands of student protesters gathered at universities in Tehran and other cities across Iran on Monday, chanting antigovernment slogans and fighting with security forces in what appeared to be the most violent street protests since the summer.
Iranian opposition supporters demonstrated at Tehran University on Monday.
The main entrance to Tehran University was sealed off by security forces, while clashes broke out between protesters and tens of thousands of Basij militiamen in squares around the city, witnesses and opposition Web sites reported. Protests erupted at universities throughout the country, including Kerman, Mashhad, Isfahan and Hamdean. The opposition staged a street rally in Shiraz.
Witnesses said there was an anger to the protests not seen since the summer months, when protests broke out after the June 12 presidential election, which the opposition has dismissed as fraudulent. The Basij responded with ferocity, using copious amounts of tear gas, electrical truncheons and stun guns in an effort to disperse the crowds.
Continue reading at the NY Times.

Neoconservatives behind the propaganda film Iranium continue to mask their pro-war, pro-sanctions agenda as being somehow supportive of the people of Iran.  The producers of the film, which has been criticized as “using the struggle of the Iranian people to push for their war-agenda,” recently released a clip arguing that Iranians need communications technology in […]

﻿ The recent battle over Azad University and its assets is not only a sign of a growing division in Iran’s hardliners. If one looks more closely, the growing importance of the IRGC in Iranian politics is also becoming clearer. Originally created by Ayatollah Khomeini to be the Supreme Leader’s personal militia, the IRGC acts […]