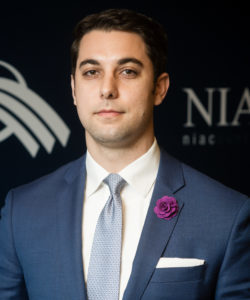 Mr. Sarmadi joins the NIAC Board of Directors with several years’ experience in the financial sector. As a Financial Advisor and Portfolio Manager at UBS Wealth Management, Kayvon’s team oversees several hundred million dollars in private client assets, including the assets of some of the top business owners in the United States. Over the last few years, Kayvon has developed a niche in pre-liquidity planning and post-transaction asset management for clients that are exiting their businesses. As a result of his rapid success, Kayvon has become the preferred financial advisor of some of the nation’s elite entrepreneurs, thus consistently putting him among the fastest growing financial advisors in the Washington, DC metro area.

In addition to his success as a financial advisor, Mr. Sarmadi is also the founder, CEO and majority shareholder of Sarmadi Brothers – a Bethesda based company founded in 2015 that manufactures luxury men’s clothing in Italy. In less than a year, Sarmadi Brothers has developed a loyal following and already boasts a growing roster of high-end retail locations and corporate customers.

Kayvon attended Roanoke College from 2006 to 2010, graduating with a Bachelors in Business Administration. During his four years, Kayvon founded the College’s first ever brand licensing program, which for the first time allowed the school to be paid royalties by retailers selling branded merchandise.

Aside from his academic and professional accomplishments, Kayvon is also quite the athlete. During his four years at Roanoke College he was a member of the Men’s Soccer team, winning a conference championship in 2007, and leaving his athletic career with all-conference honors. Kayvon lives in Bethesda, MD with his wife Nadira and their European Doberman, Pasha.