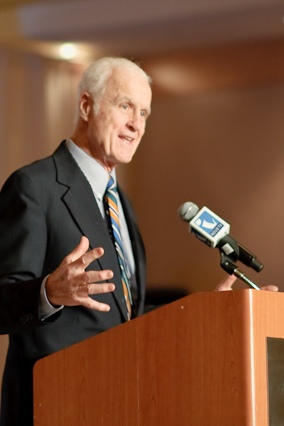 As a member of the US House of Representatives representing Wisconsin from 1983 to 1993, Jim Moody served on the Ways and Means and Public Works Committees. He was appointed as delegate to the then US-Soviet nuclear arms reduction SALT negotiations and was active in Helsinki Commission Human Rights activities.

Early in his career Moody served as the CARE representative in Iran and Yugoslavia. He then established the first US Peace Corps program in Pakistan and Bangladesh and was the first Peace Corps director for those countries.

After Congress, Moody was Vice President and Chief Financial Officer of the UN agency, International Fund for Agriculture (IFAD) in Rome, Italy. From 1998 to 2000, he served as President and CEO of InterAction, an association of 165 international NGOs working in the fields of economic development, disaster relief and refugee assistance. He continues to serve on several boards of international development and educational agencies including Junior Achievement Worldwide and Relief International.

Most recently, he has served as Senior Financial Advisor to two major Wall Street investment firms and is active on several economic policy boards including the Committee for Economic Development, and Americans for General Equity.

Moody received his B.A. from Haverford College, his MPA from Harvard University, and earned a Ph.D. in Economics at the University of California, Berkeley.

Articles by THE HONORABLE JIM MOODY