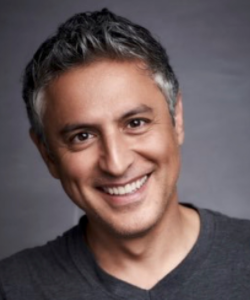 Reza Aslan, an internationally acclaimed writer and scholar of religions, is a fellow at the University of Southern California’s Center on Public Diplomacy and Middle East Analyst for CBS News. He is also a contributing editor to the Daily Beast and a featured blogger for Anderson Cooper 360. Reza Aslan has degrees in Religions from Santa Clara University, Harvard University, and the University of California, Santa Barbara, as well as a Master of Fine Arts from the University of Iowa, where he was named the Truman Capote Fellow in Fiction.

He is a member of the Council on Foreign Relations, the Los Angeles Institute for the Humanities, and the Pacific Council on International Policy. He serves on the board of directors for both the Ploughshares Fund, which gives grants for peace and security issues, Abraham’s Vision, an interfaith peace organization, and PEN USA. Aslan’s first book is the New York Times Bestselling No god but God: The Origins, Evolution, and Future of Islam, which has been translated into thirteen languages, short-listed for the Guardian First Book Award in the UK, and nominated for a PEN USA award for research Non-Fiction. His second book, How to Win a Cosmic War was published by Random House in 2009, and was followed by an edited anthology, Words Without Borders: Contemporary Literature from the Muslim World, published by Norton. His latest book is Beyond Fundamentalism: Confronting Religious Extremism in the Age of Globalization.

Aslan is President and CEO of Aslan Media Inc., co-founder and creative director of BoomGen Studios, a hub for creative content from and about the Middle East, as well as the Editorial Executive of Mecca.com, an on-line community for Muslim youth. Born in Iran, he now lives in Los Angeles where he is Assistant Professor of Creative Writing at University of California, Riverside.