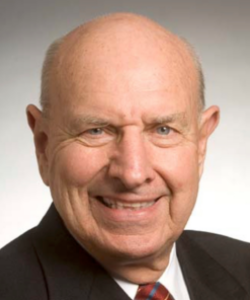 Fmr. Under Secretary of State for Political Affairs

On May 27, 1997, Thomas R. Pickering was sworn in as Under Secretary of State for Political Affairs. He previously served as Ambassador to the Russian Federation from May 1993 until November 1996. He also served as Ambassador to India from 1992-1993, Permanent Representative to the United Nations from 1989-1992, Ambassador to Israel from 1985-1988, to El Salvador from 1983-1985, and to Nigeria from 1981-1983. He was Assistant Secretary for Oceans and International Environmental and Scientific Affairs from 1978 to 1981. From 1974 until 1978, Ambassador Pickering was the United States Ambassador to the Hashemite Kingdom of Jordan. From 1956 to 1959, he was on active duty in the United States Navy and later served in the Naval Reserve to the grade of Lieutenant Commander. Between 1959 and 1961, Ambassador Pickering served in the Bureau of Intelligence and Research of the State Department, in the Arms Control and Disarmament Agency, and from 1962-1964 in Geneva as political adviser to the U.S. Del. 18 Nation Disarmament Conference. Following his assignment to Geneva, Ambassador Pickering studied Swahili at the Foreign Service Institute in Washington and was assigned in 1965 to Zanzibar. In 1967, he became Deputy Chief of Mission in Dar Es Salaam, Tanzania, and in 1969, he returned to Washington to become Deputy Director of the Bureau of Political-Military Affairs. From 1973 to 1974, he was Executive Secretary of the Department of State and Special Assistant to Secretary Rogers and Secretary Kissinger. In 1983 and in 1986, Ambassador Pickering won the Distinguished Presidential Award and in 1996, the Department’s Distinguished Service Award. In 1984, he received an honorary doctorate-in-laws degree from Bowdoin College. Subsequently, he has been similarly honored by ten other universities. In 2006, he retired as senior vice president international relations for Boeing.  Ambassador Pickering is currently the vice chairman of Hills & Company, an international consulting firm providing advice to U.S. businesses on investment, trade, and risk assessment issues abroad, particularly in emerging market economies. His foreign languages are French, Spanish, Swahili, Arabic and Hebrew.