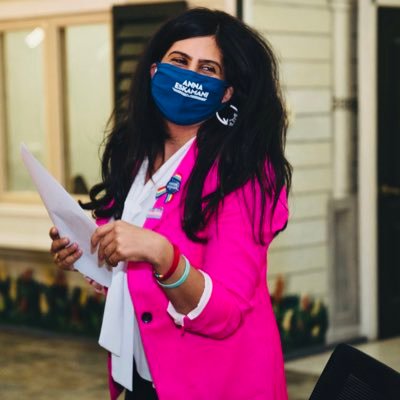 Representative Anna Eskamani is the first Iranian-American woman to be elected to public office in Florida. Born and raised in Orlando, FL, Eskamani is the daughter of working-class Iranian immigrants who worked multiple jobs to make ends meet. When she was 13 years old, Eskamani lost her mother to cancer. That loss, alongside the challenges Iranian women leaders faced in the struggle for social change, inspired Eskamani to fight for hardworking families. Eskamani cherishes her deep ties to the Iranian American community and our rich cultural heritage.

As a first-generation Iranian American, Eskamani staunchly opposed the Muslim Ban, saying “We are a nation of immigrants, and my story is not unlike that of many other fellow Americans, or of those who aspire to become American citizens one day. My personal identity and experiences compel me to be a passionate advocate for all people, and to push back against political agendas that marginalize and attack people because of how they look, talk, or who they worship.”

As a State District Representative, Eskamani has worked relentlessly to protect people through effective advocacy, bold leadership, and smart management. A longtime bridge-builder in her community, Eskamani led the charge to increase arts and culture funding statewide by 800%, and pushing forward a clean-energy agenda and pushing back against polluters. Eskamani has also done amazing work helping people in her district navigate the unemployment system in the wake of the Coronavirus crisis.

Eskamani has two master’s degrees from the University of Central Florida, where she is also currently pursuing a PhD in Public Affairs. At UCF, Eskamani first got involved in advocacy work focusing on international human rights through her involvement with the Iranian Student Organization and on domestic policy issues as an organizational leader with the College Democrats at UCF. These experiences in campus organizing led Eskamani to also focus on women’s issues, most notably as Senior Director of Public Affairs and Communications for Planned Parenthood of Southwest and Central Florida.